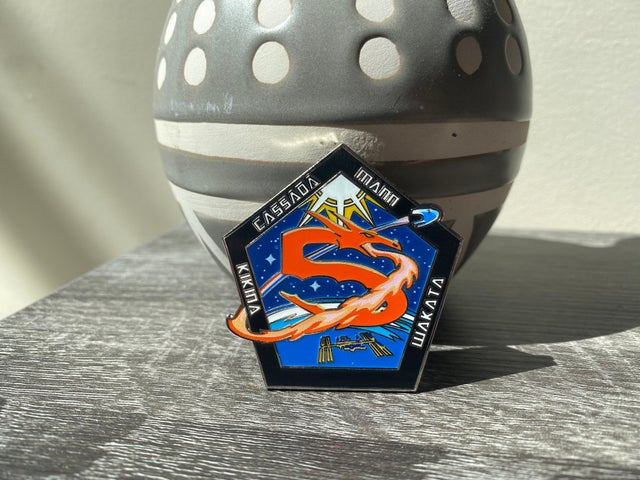 The mighty dragon is represented as the number 5, breathing out fire which becomes the trail from the crew dragon vehicle, and features prominently on the NASA Crew 5 (USCV-5) pin! This is the fifth operational flight of the crewed spacecraft scheduled to launch on a SpaceX Falcon 9 rocket October 2022. Launching inside is commander Nicole Aunapu Mann (Commander - NASA), Josh A. Cassada (Pilot - NASA), Koichi Wakata (Mission Specialist 1 - JAXA), Anna Kikina (Mission Specialist 2 - Roscosmos).

The mighty dragon features prominently on the 2" Crew-1 pin! This is the first operational flight of the crewed spacecraft. Launching inside is commander Michael S Hopkins (NASA), pilot Victor J Glover (NASA), mission specialist Soichi Noguchi (JAXA) and mission specialist Shannon Walker (NASA). The patch also features the emblems of past crewed spaceflight, Mercury, Gemini, Apollo, Shuttle and then the outline of the International Space Station to the top, and the crewed vehicle in-between!

The commercial crew vehicle and rocket, ready, and poised to take another crew into space! The vehicle that brought the United States back into taking astronauts into space from American Soil and the first commercial vehicle to do so! Get your pin today so that you are ready to wear it for the next time it launches!

The amazing crewed capsule with trunk attached! The first human rated space vehicle mankind has built in the commercial sector. An amazing accomplishment by everyone involved and is truly a giant step towards our species becoming interplanetary and living amongst the stars!