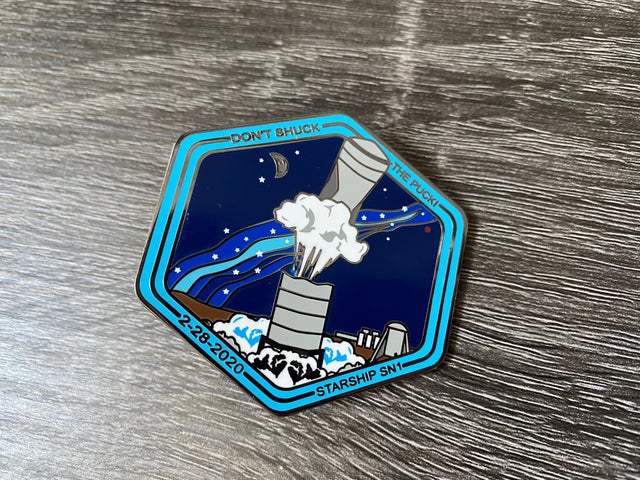 A Launch Pins exclusive to commemorate Starship SN1. The design was done in collaboration with photographer/designer Crystral Gabriel (@star_shattered) from Go Space Launch (@gospacelaunch). SN1 was the second Starship vehicle, having been built in Boca Chica, Texas after the first version, Mk1, had failed cryogenic pressurization. Stacking of the various sections began around the 17th of February 2020. It was then transported to the testing area and liquid nitrogen was loaded into the tanks to test for leaks. Unfortunately on February 28th 2020 at around 10pm CST their was a major rupture and vehicle blew apart. Elon Musk later indicated that the thrust puck at the base of SN1 had flaws, hence "Don't shuck the puck" and was the cause of the rupture. While SN1 was destroyed, it paved the way to improving the vehicle's design and materials and continue on to the next revision of Starship!